Remember when I made vegan s’more ice cream sandwiches?

Put that vegan s’more ice cream sandwich with graham cookies back in my mouth!

I also used to hoard.  OK, fiiiiineeee… I’m still a semi-hoarder.  Let’s call it a memory collector for now though.  It sounds much nicer, doesn’t it?

But seriously, a little over a year ago, I aired the disgust about all my clutter and how I am the definition of a procrastinator.  Well, it’s finally come to fruition.  Timing is everything in life, right?  That or I just procrastinated long enough and it’s now become a necessary evil that I have to downsize and go through all those things I said I would do eventually.  You know, like the following:

I can now add to that list many other things to pry from my from my grasp.  Like the drawers full of half-finished yarn projects, or the shoe boxes full of brochures (and Tiger Woods magazine clippings, like a Whitney Houston Bodyguard stalker), and of course stuff that just needs to go away forever.  Luckily… Yes, luckily… a decision to move out of suburbia and downsize my living space has provided me with the opportunity to go through many treasure boxes of goodies .

Just like treasure, my golf trophies from the 90s are gold… in color

I stand by my belief that the 90s rule… movie ticket stubs, floppy discs, the Seattle Sonics, and VHS tapes?!  Don’t tell me it’s not all DA’ BOMB!

Now, why I feel the need to have lots of “stuff” surrounding me is baffling.  If I used the logic of my 5-year-old-self, we’d say that “things” all have feelings and I don’t want to hurt their feelings by dismissing them.  Unfortunately, that logic falls apart because this doesn’t end with my memory collecting…  it oozes into my kitchen too. 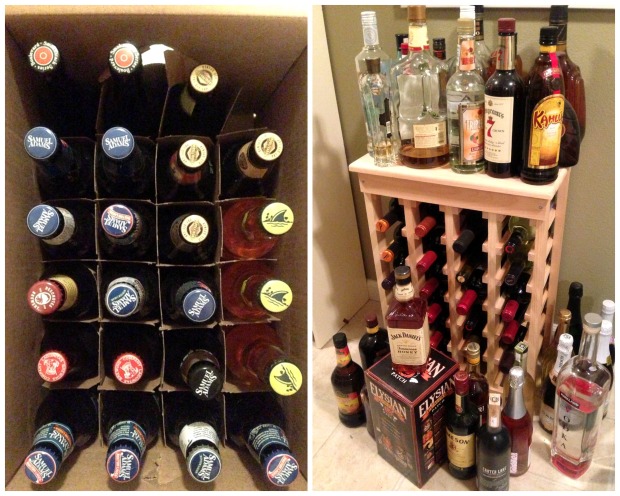 People keep telling me that I’ll hit a point where I just stop opening the boxes and chuck it all.  They have also said that I will feel better getting rid of this “stuff” because removing clutter will remove stress.  I have yet to reach this understanding.  I have however, managed to chuck an entire container of jewelry making materials.  No joke, there was probably 30 pounds of beads, wire, and crap. GONE.

Car load #7 of Goodwill run… Including SHOES! I dun good.

Now that I’m feeling relatively sad with the recent disposal/donation of these items, my evenings have encompassed aimlessly wandering around my empty home feeling deflated.  Kind of like when you get too excited to eat your homemade vegan ice cream and it is sooo not ready yet.

But, I will eventually get over it (I can’t even remember what is sitting in the seven, 44 gallon garbage bags in my garage…) and it was super fun getting distracted by all the trips down memory lane.  And my moving date is rapidly approaching, so I will be able to see how much of the retained treasure my new place can actually handle!  And in the meantime, if you need me, just follow the trail of memories… or ticket stubs from 1996… or used salsa containers…