When reading the title of this post, please picture a true oyster connoisseur shucking through a massive stack of fresh ones, slurping each one down, and then breaking with gulps of wine…  Yeah, I’m into it.

Everyone is likely aware that my year has been a little crazy, so I’m super late in posting about both of these oyster events, which is why they are paired up together.  The beginning of the year is usually a busy time for oyster events…  Walrus and the Carpenter picnic (which I sadly missed this year), oyster shucking competition at Local 360, and this year there was also bOYSTERous hosted by SeattleMet. 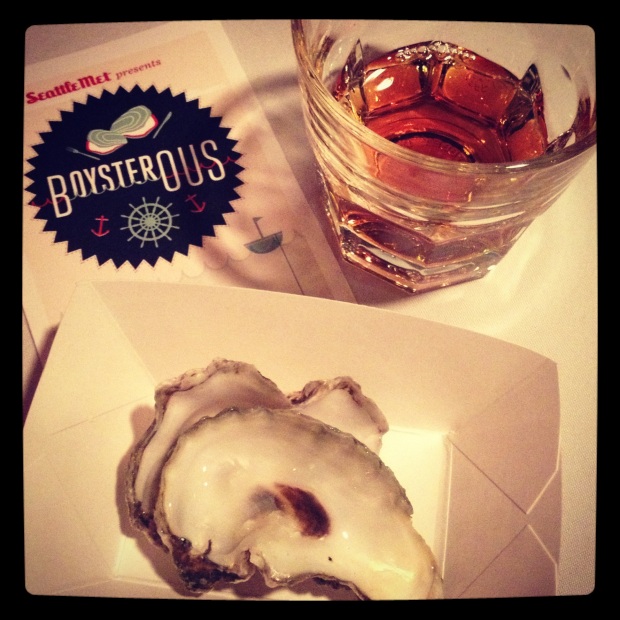 Too much scotch caused photo of empty oyster shells 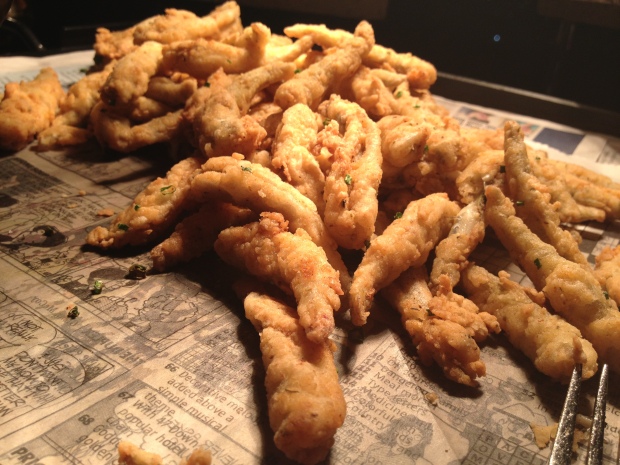 Smelt is still smelt when fried…

I’m gonna talk about bOYSTERous first, cause it’s my blog and I’ll do what I want… plus it was first chronologically and I’m systematic like that.  Ever since my cousins’ wedding a few years ago where my Uncle gave us all some scotch lessons, I have learned to appreciate a good glass of scotch and at bOYSTERous it was sponsored by Bowmore, which meant scotch tastings were included…  SHUT the FRONT DOOR.  I had many a glass of scotch…  clean, please.  No ice. 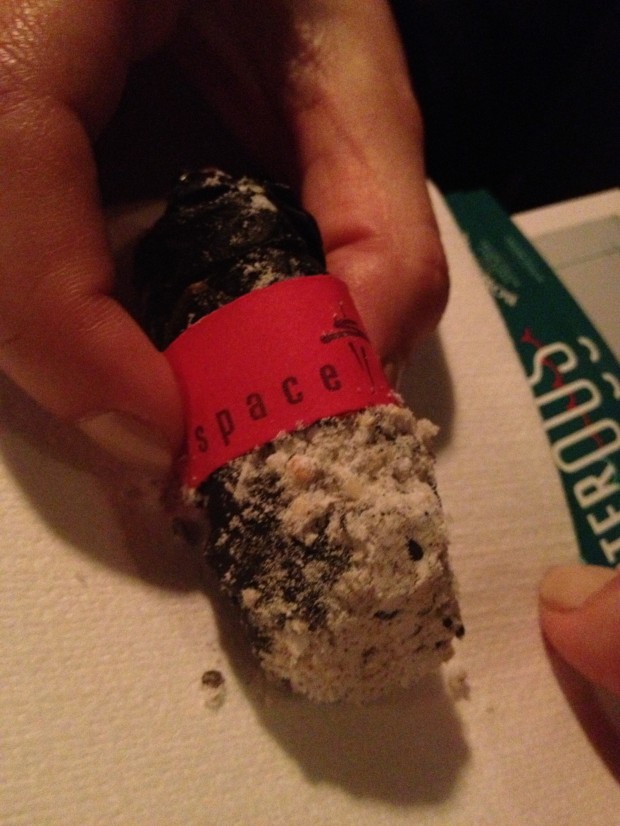 Edible cigar ‘thing’ that I did not eat

bOYSTERous was also sponsored by Campari, so you could get cocktails featuring their ‘stuff’ as well, but the scotch was #1 better and #2 obviously a better bang for your buck…  Lia and I definitely had to go hunt down some starch following this event before we headed home.  There may have been stumbling to soft pretzels following bOYSTERous.

Food event tables seem to get messier as the evenings progress… 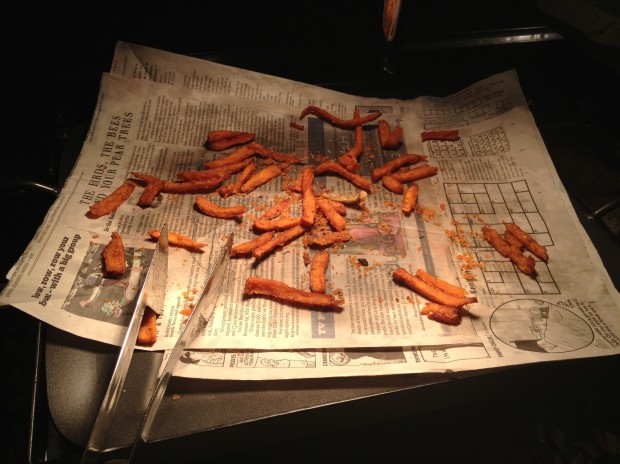 Cold, unsatisfying sweet potato fries at the end of the night 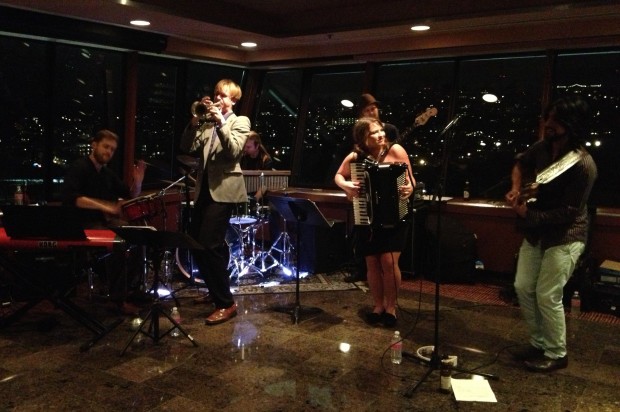 Bet you’ve never heard Outkast “So Fresh So Clean” on a trumpet and accordion. WIN.

bOYSTERous turned out to be pretty awesome.  I particularly liked the scotch part!  It was also interesting to try oysters with different spins on them.  The most unique was definitely the oyster with olive oil from Anchovies & Olives; while delicious I still say it’s just wrong!  Oyster purist here.

Always start the night off right with a cocktail, Rhubarb Rickey!

Following the bOYSTERous event, there was the annual oyster shucking competition at Local 360, a favorite establishment of mine! Last year at the first shucking event, chef Robin Leventhal was one of the judges and this year she was there as the host and new head chef at Local 360!  She’s since headed off for Walla Walla to teach at a culinary school…  That woman is on the mooove! 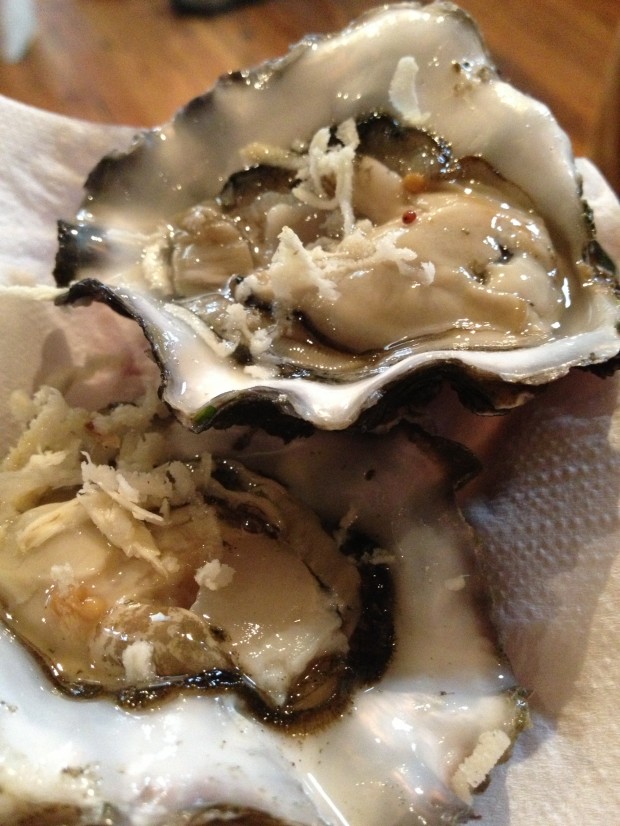 Oyster with “horseradish” aka cheese… smartguys gave us that info!

Oyster awaiting their shucking into my belly

This year the shucking event had more oysters for consumption, snacks at the beginning, and lots of wine… The important stuff. BUT my “Get Shucked Up” buddy from Taylor Shellfish was missing and I’m wondering how next year will go down with Robin gone, Rob no longer with Effing (officially), and my being too chicken to try and battle it out as an amateur chick oyster shucker. Not that I have anything to do with the event itself, but still!

Judges got in on the shuckin’ competition too!

Although the event was more organized this year, there was something less fun about it.  It almost felt too public, even though there were probably less than 50 people there…  I loved that the first year had that underground vibe and felt more top secret.  It almost felt trendy this year.  And now I sound like a freaking hipster whining that it’s too mainstream…  Jam a fork in my leg and sprinkle me with salt, cause I’m DONE.

Next year we’ll see if I can man-up and try to compete next year, or if the pressure will overwhelm me  (highly probable)…  The year of 2013 is definitely the year of change, but the year of 2014 may be the year of being a chicken.  For now, I will happily take any person who wants to shuck oysters for me, especially when there is wine involved!

One thought on “Oysters for Life!”